We’re at the end of the season here in the Northeast–the motorcycle season, I mean. This is just a little something about a fun Pennsylvania ride.

Ride East down Powell’s Valley Road, a fairly generous piece of fertile land between two soft, old PA folded mountains. The valley used to be all farms, but now houses are growing like mushrooms in the fields. It’s so far away from almost anything, I wonder what the people—especially the ones in the windswept new McMansions—do for a living. 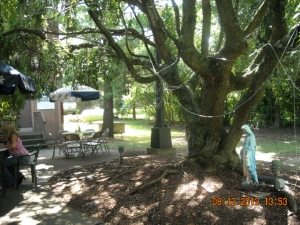 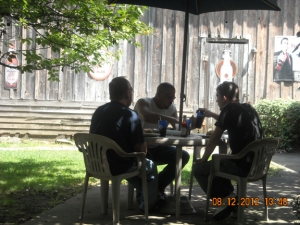 When you see the sign for “Carsonville” you’re almost there—and then, suddenly, you are. The road straight ahead drastically narrows. There’s a stop sign and a wide left hand sweep. If you go dashing around that left turn, up the mountain, you missed it. The worn building on your left  is the “hotel,” actually a restaurant and hunter/biker bar of ancient reputation.  It’s not really what’s inside that counts—although there are trophy elks’ heads and a sad and beautiful mounted cougar on display in the dining room. It’s the view from the backyard patio/party site, across the fields and farms, a patchwork which goes to the crumbling rock fences abutting state forest lands. At least, that’s what we like most about the place.

Other riders, large groups of HD/Victory/Gold Wing riders, the kind who come in large, loud packs, stop off, and chow down on burgers, fish sandwiches, crabcakes and huge plates of fries, washed down with a few beers/sodas, and socialize.   (The restaurant is said to cook a mean steak, but we’ve never had one.) We’re solitary rocket riders, on our favorite journey over the mountains, riding our black Hyabusa. We like to arrive early on Friday or Saturday or Sunday, as the place wakes up—11—11:30—12:00 ish—and sit, like Ferdinand the Bull, “just quietly” at an outside table while the staff and other bikers roll in. 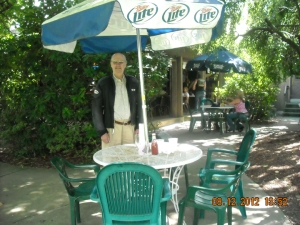 “When do you open?”  Customer’s will ask Denis. He’s one of the owners’ sons, a man who lives just up the mountain and who often rides his own classic early 80’s Honda 650 to work.   This fine machine has only 82,000 miles on it and we always admire it because it reminds us of our own “thrilling days of yesteryear.”

“When I get here–it’s open,” says Denis, with a smile. 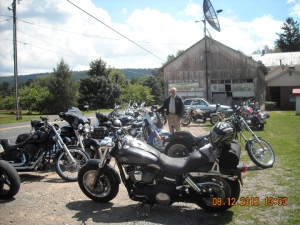 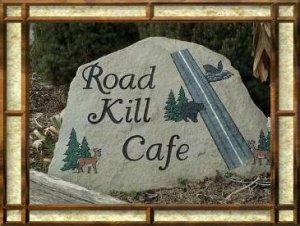 Just returned from a camping trip in Pennsylvania. Tough to describe where, as the closest large town is Hancock, over the Maryland line. I was hoping to have breakfast at a restaurant in the bona fide outback with the catchy name of The Road Kill Cafe. There’s probably one of these in every state, but these particular folks do a good breakfast and cater to hunters and the locals–hard-scrabble farmers, retirees, escapees, survivalists and utopians–whose homes hide in every hollow. Sadly, the great Mid-Atlantic power outage had struck their little valley between the folded mountains, so The Road Kill was closed.

I have a T-shirt which I picked up there sometime back, with their catchy logo: “The Road Kill Cafe: You Kill It, We Grill It.” On the back is a list of “Menu Specials, Fresh from the Fender” such as “Snake Bake,” “Raccoon Ribs,” “Groundhog Goulash,” “Too Slow Doe,” “Pavement Possum,” etc. As someone who works hard to avoid hitting critters and who despises the Yob-Ohs who drive over animals just because they can, I shouldn’t find this T-shirt funny, but, mostly, I do.  The only entry I’m seriously unhappy about is “Cream-o-Kitty,” and that one set me thinking. If the creators of this tee think squashed cats are funny, then why aren’t we also offered “Devilled Dog” or “Delicious Down-home Doggie Dumplings,” or “Bumper Bowser?”  Have I stumbled across a redneck food taboo? Is the hound dawg “unclean?” Or is it “sacred?”

I mean, we all know the Chinese eat anything that moves. (They  have their reasons.) We know Vietnamese men eat dogs for virility, that the French eat horses and that here in U.S.of A., “Beef is what’s for dinner.” Personally, during a (very) long ago sojourn in the West Indies, I, then a finicky nine-year-old, ate and enjoyed both possum and iguana. The latter tasted “like fish,” and also, as you’ve probably anticipated, “like chicken.”  This makes more sense lately, since we’ve learned that today’s birds are the thunder lizard’s descendants.

Personally, cats, dogs, horses and whales are among the beings off my menu for reasons of conscience. What’s off your menu, or has anything unusual ever been on it? What say you, gentle reader?

I remember when there were only a few members of the “inner circle” with top hats, Victorian black coats and silly, fake aboriginal names like “Thunder Maker” and “Cloud Rider” up on that stage. This thing has really taken off since the “Groundhog Day” movie back in 1993.  The ever-growing numbers in the “inner circle” and yearly attendees prove that.

The custom comes from German settlers, who, in the old country, may have looked for bears or badgers to awaken as an indicator of spring. In southeastern PA, you can still find a few “Grundsow” Lodges, where for the day, Pennsylvania Dutch only is spoken. (English results in a fine!)  The dawn celebration includes speeches, skits and traditional foods. I’d be willing to bet the original attendees waited at the burrow to see if the hibernating creature (whatever!) would emerge. If the critter was awake, the weather had likely been warm enough to rouse it from sleep. An early spring—a signal to get ready for planting–could be safely predicted.

Today’s Phil is, according to Punxsutawney legend, 120 years old, but anyone can see he’s been recently replaced. His newest incarnation is a slender, gentle young groundhog who first appeared on stage a few years back. (He had a runny nose yesterday, and I hope he’s feeling okay!)

This youngster replaced an earlier, massively obese old fellow who probably reached the end of his decade-in-captivity life span. The older groundhog was far less human friendly, and did wonderfully entertaining things, like peeing on his handlers and chewing on their gloved hands. To me these acts of defiance were an important part of the show. After all, they’d dragged the poor beast out of his nice warm cage in town and brought him out in the middle of fireworks, flashing cameras, TV lights and a host of enthusiastic people (many of them, I’m sorry to report, drunk) screaming at the top of their lungs: “Phil-Phil-Phil!” Heck, such treatment would unnerve anybody, not to mention a poor, overweight groundhog. Of course, not being eaten after being dragged out of your warm burrow is a definite improvement over the treatment many groundhogs received in the protein-starved  mid-winter past.

February 2 is also Candlemas on the Christian calendar, a/k/a The Feast of the Purification of the Virgin. In medieval times it was one of the “cross-quarter” days on which bills were paid, workers hired and contracts drawn, important in every market town. Both the religious observance and the business deals go back even further, into pagan times. Even the most casual observer can see that the days are growing longer now, and of course, the ancients, who were formidable astronomers, had noticed this fact.

February 2, known as Imbolc in the Celtic calendar, was sacred to the red-haired Mother Goddess Bridget, who tended a magical cauldron, and who was patroness of poetry and all the “arts of civilization.” Weather prediction was part of her festival, too, as the time of the spring planting was of vital importance.