I’ve spent a lot of my life fixating upon dead heroes, which means, as we turn into October, I’m entering my favorite other-worldly season.  (Maybe “hero” isn’t quite the word, but “famous historical personalities” is unwieldy.)  Richard III came into my life early, just pre-teen, via a discarded paperback, “The Daughter of Time” by Josephine Tey, fished from a wastebasket in the lounge of a 1950’s Barbados hotel.  For some reason, this mystery story about a man whose chosen motto was “Loyalty Binds Me” and whose reputation had been blackened, started an obsessive fire in my brain which is, even 50-some years later, burning hotter than ever. 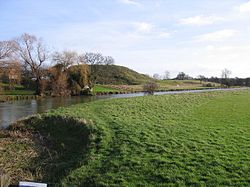 Richard started life in 1452, which is a long time ago—560 years at Fotheringay Castle, now nothing more than a heap of earth by the River Nene where the original motte and bailey stood. As you can see from the picture, 500+ years doesn’t leave much behind! He was born on October 2, which makes him a Libra. If the Tudor spin doctors are to be believed, he was a seriously out of balance child of this supremely balanced heavenly sign. If the skeleton just recovered proves to be the King, it appears that he had a deformity at birth, a severe scoliosis, which would have caused his right shoulder to be carried high.  He only lived for thirty-two years, but he (or his distorted shadow) has left a large mark on World consciousness via Shakespeare’s blood-and-thunder melodrama.

I’ve been flailing around in the flesh more than twice as long as this particular dead hero, but have made not a jot of difference to the greater world.  Still, King Richard, his fair wife, Anne Neville, and others of the bloody Plantagenet cousinage have been talking, loving, cutting off heads and battling in my imagination since childhood. When the recent excavation in that Leicester car park came up with those bones–scoliosis, battle wounds, and all—it started the whole royal panoply, complete with banners and drums, parading through my mind.   More than that, some days it comes seeping out, a moving picture of antique glory superimposed over the ordinariness of daily life. I feel closer to these semi-imaginary long dead than I do to my neighbors. After all, these royal shadows have been with me from childhood. I’ve imagined them while standing on tropical beaches, Cornish cliffs, and all the way to this present slough of suburban senior citizenship.

Roan Rose, my new Second Wind novel, grew from a long time dedication to this old, old story, one which has been fictionalized a great many times already. Still, I “owed” Richard and Anne a book,  even despite the recent big name debut of something similar. In my novel, the fall of the House of York is seen through the unusual lens of “downstairs” eyes. The narrator, Rose, begins her association with Anne Neville while they are both children. Although Rose loves and is loved in return, she can never be more to Anne and her royal cousin (eventually, husband, Richard) than a “common woman,”  a servant. She alone of their triangle of affection will endure to tell of the end of an ancient dynasty and of the dusty survival of a peasant. The price she pays for her loyalty to master and mistress is high.

I can hardly bear to let her go. I’m sure a lot of other writers out there will understand this reluctance to end my “visits” to a much loved creation. 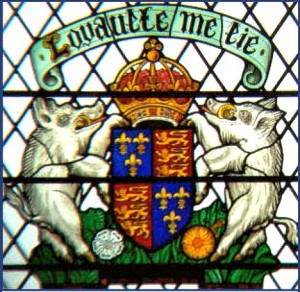