I’ve received raves for the cover of my debut suspense thriller STACCATO, so the pressure was on to think of equally compelling ideas for my latest release.

This project has held the title ICE ON FIRE since its inception as a screenplay, but after receiving input from quite a few published novelists I decided stay with the musical theme for Book Two of the Deputy Hawk/Inola Walela thriller series. In doing so I had to come up with a different title—a single word grabber more relating to this rock music themed thriller. Not an easy task, believe me.

Many suggestions were offered, but SNARE kept coming to my mind and wouldn’t let go. I try my best to implement titles that signify more than one element relating to the plot. The word “snare” has not only has a musical connotation, but also means caught in a trap—which every character in the novel finds themselves ensnared in.

Once the title was nailed down I enlisted the assistance of the incredibly talented designer Chantelle Aimée Osman for the crucial task of coming up with ideas for the cover most fitting the new title. Chantelle insisted I stay with the “hands” theme. She was absolutely right. Due to her innovative efforts, SNARE truly is a killer cover. 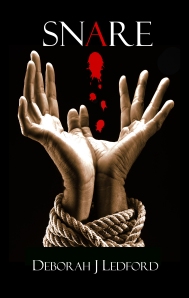 SNARE is slated for a limited release December 28th and will be available to a wider audience beginning February 22, 2011.

As with STACCATO, I look forward to taking you on the journey to publication for this release as well.

So, what do you think? Does the title work for you? Is this cover an eye catcher? I look forward to your comments.

Be the first to read the first 25 pages of SNARE before the official release by going to my website.

Deborah J Ledford is the author of the debut suspense thriller novel STACCATO, now available from Second Wind Publishing, Amazon and Kindle. If you’re in the Arizona area, STACCATO can be found at Borders Scottsdale Waterfront, The Well Red Coyote, and Changing Hands Bookstore.