You know him. I know you do. That evil, twisted voice in your head. He may not tell you to perform evil, twisted acts, but he tells you how awful you are, how you are wasting your time. No one will read this crap. No one will enjoy it. Pencils down, loser. Don’t quit your day job.

He’s like a virus, taking over every neuron in the brain until you become a quaking puddle of self doubt.

I’d like to think I’m immune to him. For the most part I am, when I’m writing. It’s afterward, when I have to submit, or when I need a beta reader (stupid term, that), that I start to lose my marbles.

I took vacation last week. Where did you go? Somewhere exciting, I hope! Lots of sun! Lots of rest? You look exhausted.

Piss off. I stayed home and finished writing a novel. And then, at the suggestion of my brother, whom I love dearly, I asked another writer to read it. My brother and I went to high school with this writer. They are three years older than me. And even though I’m in my forties, this guy is still an upperclassman, and when I asked him to read it, I felt like a freshman all over again with Mr. Hyde screaming loud and clear in my ear.

I paced around after I sent the request. OmygodOmygodOmygod. What have I done? WHAT HAVE I DONE? Because really, it is like showing someone your boobs, if you really think about it. Please look at this most personal part of me and let me know how it looks to you. Actually, it’s even worse than showing someone my boobs. . . it’s more personal than being seen completely naked. It’s awful. I’m still recovering.

At any rate, he’s reading it. Of course he is. Because he’s not an upperclassman anymore. And I’m not a freshman.

My nephew was up visiting a few weeks ago. He is twenty-two now, and our talks have tipped over to the other side of the mountain. Life. Goals. Career. Dreams. Things like that.

“I have a book idea,” he said sheepishly. I recognized the I’m-showing-you-my-boobs-here-please-don’t-ridicule-me tone in his voice.

So I leaned forward slowly, like I was approaching a deer on the side of the road. I didn’t want to scare him away. For some reason, I was terribly afraid someone would walk in and ruin this moment . . . like what he was telling me was this flickering flame in a tiny pile of kindling he was trying to blow oxygen into. If someone, anyone, came into the room right then, it would be snuffed out.

We were in luck. The house was quiet. Everyone was outside, talking, laughing, running around. We had some moments to talk.

He shared his idea. A good one. A fantastic one. A brilliant one. The thoughts sparked off him and made his eyes glow. 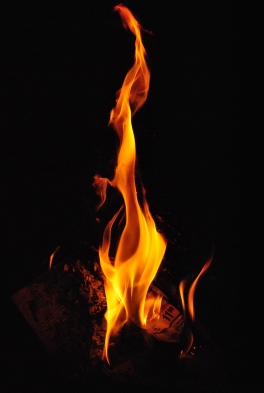 And then he faltered. It was like a horror movie, when everything is going good and then the bad guy sticks his hand through the hero’s chest and tears him apart.

I recognized him in my nephew’s eyes. The flush of embarrassment in the cheeks. The downward cast of the eyes. The (dare I say it?) SHAME. His speech halted. He stammered, like he realized he’d said too much, was sitting there, naked and was waiting for me to laugh. Well, that’s horrible. Don’t quit your day job. I wish I could UNHEAR everything you just said.

I wished there was something profound I could say to him . . . something that would erase that uncertainty and niggling self doubt. I told him that the worst enemy of creativity was one’s self. And that to listen to the negative voice in one’s head was a bad idea. “Work through that,” I said. “Work in spite of it. Your idea is brilliant.”

We went about our day after that. A cookout. Family laughter. A movie late at night. And I wonder if anyone else knows he harbors this secret, this kernel of an idea, white hot in his mind.