During a recent conversation I was asked how many books I have published. I said, “Eight.” That seemed to be an impressive number, because their response was, “Wow, you’re prolific.” I laughed and told them that I’d been writing for twenty-two years and that I considered that number not so high.

In truth, it took me ten years to write my first two, and I’ve written seven more (my ninth is soon to be released) in the last twelve years. Even that latter number pales in comparison to writers who complete a novel every six months.

In my defense, I go for quality rather than quantity. That is, I don’t write formula or even genre, even if all my stories are about the universal ideals of love, loss, regret and death. Although I apply what I previously learned to each new project, I tend to recreate the wheel for each one.

After that recent conversation ended, it occurred to me that for my monthly Second Wind blog, I’d include in one place all my titles with a brief synopsis of each one, along with reviews.

A love story that touches four decades, 500 Miles to Go is about the importance of, and the risks associated with, the pursuit of dreams. When our dreams cause angst to our loved ones, they often become nightmares.

Gail fell for Alex Król before she learned that he risked his life on dirt tracks during the summer months to the delight of fans who paid to see cars crash—the more spectacular the wreck the taller they stood on their toes and craned their necks to see the carnage. When Alex makes his dream to drive in the Indy 500 come true and he witnesses the deaths of two drivers in his first start, he must ask himself if his quest to win the world’s greatest race is worth not only the physical risk, but also losing the woman he loves.

“…J. Conrad Guest has demonstrated once again not only his innate literary ability, but also his marvelous ability to draw us irresistibly into this incredible, thrilling and heartfelt story. We would jump ahead to the finish, if the writing were not so compelling—and when the race is over, we want to go again!” —Lazarus Barnhill, author of Caddo Creek

“A sweet love story gives way to the love affair with speed… First loser becomes disillusioned winner, hindsight waxes philosophical, and a lonely man reminds us, ‘One doesn’t find love… It’s not some object to be unearthed… Love is a choice.’” —Sheila Deeth, author of Divide by Zero and Amazon Top 1,000 Reviewer

A Retrospect In Death

A Retrospect in Death begins with a man’s death. The reader is taken to the other side where the narrator encounters his higher self—the part of him that is immortal and is connected to the creator. The protagonist learns (much to his chagrin) that he must return to the lifecycle. But first he must be “debriefed” by his higher self, and so they set about discussing the man’s previous life—in reverse chronological order: knowing the end but retracing the journey, searching for the breadcrumbs left along the way.

A Retrospect in Death is a story about discovery. You think you know yourself? Perhaps you only think you do. Do those closest to us know us better than we know ourselves; or do they, as we often insist, know jack? Consider that only in death can you really know, and understand, who and why you are—or were. And then ask yourself: At that point, is it too late? Does it even matter?

“J. Conrad Guest’s A Retrospective in Death is a languid, oddly compelling tale, evoking an era with a wealth of intricate detail, creating a memorable yet achingly ordinary man, and searching for meaning and purpose in it all.” —Sheila Deeth, author of Divide by Zero and Amazon Top 1,000 Reviewer

“A Retrospect in Death is one part Ingrid Bergman, one part Joseph Heller, a la Catch-22, and—with its copious cigar smoke and leggy women—two parts vintage J. Conrad Guest. Like his previous novels, readers will be sorry when the story ends.” —Lazarus Barnhill, author of Lacey Took a Holiday

A World Without Music

Can a Gulf War veteran suffering PTSD finally leave behind his past to find the music that will make his life worth living?

Reagan returns from the first Gulf War haunted by horrific images of Tom Wallach, a dead marine he brought back from the desert. Seeking refuge from his nightmares and broken marriage in a jazz quartet in which he plays bass guitar, fifteen years elapse and he has a one-night fling with Rosary, a beautiful young woman he meets at one of his gigs. When his ex-wife comes back into his life, Rosary’s obsession turns into a fatal attraction.

With help from Wallach’s ghost, the daughter Wallach never met, and a friend who is much more than he appears to be, Reagan discovers he must let go of his tortured past if he is to embrace the future.

“J. Conrad Guest ventures into new literary territory, and once again the result is gripping and beautiful. The seamless prose draws the reader from the horror and peril of combat to the agony of post-traumatic stress and despair. Protagonist Reagan is a creature of the brutality of the real world, stripped of idealism and past, waiting for miracles, searching for the music that will make his life worth living.” —Lazarus Barnhill, author of Lacey Took a Holiday

“…And the music of the common man proves as vital to our world’s symphony as that of heroes and villains throughout all time. A World Without Music reads like a masterpiece of music, culture and life, and is highly recommended.” —Sheila Deeth, author of Divide by Zero and Amazon Top 1,000 Reviewer

Backstop plays the catcher’s position for any team in any city in America with a major league ball club. You cheer him when he delivers, and boo him when he doesn’t.

Backstop’s story—told in his own words during the seventh game of the World Series in what could be his last game after fourteen years in the major leagues—chronicles his rookie season, takes the reader to Chicago where he finds romance, and reveals the heartbreak he endured in the aftermath of an adulterous affair.

Cheer for Backstop both on and off the field as he plays the most important game of his career—haunted by the ghost of his father who passed away before Backstop achieved stardom—and fights to win back the heart of the woman he loves more than the game.

Superbly crafted with a deft, tender touch, Backstop: A Baseball Love Story in Nine Innings is a compelling tale of following the true passions of the heart. A truly heartwarming read.” —Apex Reviews

“Baseball, like love, is a game of errors and regrets. Pop-outs, ground-outs, strike-outs. A bad swing, a bad throw, a bad hop. But what captivates us most is the possibility of the next at-bat, of the chance for a rally, of an unlikely clutch play that suddenly changes the stakes. This is where J. Conrad Guest meets us in Backstop: in this beautiful, hopeful place closest to our hearts, where we play for the love of the game, and we love with everything we have.” —Rachael Perry, author of How to Fly

Robert Porter is enjoying the fruits of success: a best-selling detective novel featuring a hard-nosed detective circa 1947 named Joe January, and a lucrative contract for the sequel. But his world comes crashing down around him when he witnesses his wife’s infidelity.

As Porter sinks into a morass of grief over her abandonment, only one person can help him regain his self-esteem and dignity. One man alone can help Porter set things right… and that person’s name is Joe January. But he doesn’t even exist… or does he?

“J. Conrad Guest has taken the heartbreak of sexual betrayal and turned it into a romance-fantasy… Readers will not be able to put it down.” —Current Entertainment Monthly, Ann Arbor, Michigan

“Prompted by his detective’s instincts and the photograph of a woman who seems strangely familiar, January begins his search for the reasons behind his existence. His quest will take him down numerous and occasionally violent paths: there’s a beast lurking at the periphery of this, Robert Porter’s alternate reality.” —Ellen Tanner Marsh, New York Times best-selling author

Many people obsess over their past, but no one more than I. Perchance it’s because, as a man out of time, I left behind so much of it unlived. If that makes little sense, consider that I’m a time traveler. Although the backdrop for my story is time travel and alternate realities, the underlying theme is a more human one—of love lost, another love found only to be lost, and of a decision, the result of a single regret brought about by the realization that my self-professed courage to never risk my heart to love was instead cowardice, to rectify a wrong in a life filled with myriad regrets. You may judge me, as it is man’s nature to judge others, or discount my story as the ravings of a lunatic mind or simply the fiction of an overactive imagination—but before you do, I ask that you read on to the end, and then ask yourself if you would have acted any differently.

“J. Conrad Guest gives us an unforgettable adventure seen through the cracked lens of our broken present and an all-too-possible what-if past. Full of intrigue, romance and scathing social commentary, it is both an ambitious novel and an exciting, page-turning imaginative quest for that which is beautiful and true.”
—Rachael Perry, author of How to Fly

Imagine an alternate history in which the United States fails to enter World War II in time to help the Allies defeat the Tripartite before Germany becomes too strong to defeat. Imagine a future in which Germany has perfected genetic engineering and is systematically eradicating whole nations in an effort to secure the empire Hitler vowed would last a thousand years; a future in which Hitler lies in a cryogenic chamber, awaiting treatment for a cancer for which a cure has been discovered. 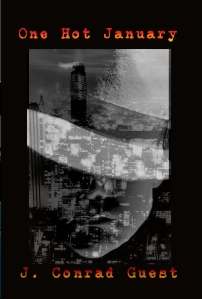 Imagine a future in which a faction of genetically engineered people, opposed to Hitler’s tyranny, choose to travel back in time to amend future history by influencing Churchill to withhold from U.S. Intelligence the vital decrypt specifying the date and time of the raid on Pearl Harbor. Imagine a fast-talking private investigator from the Bronx named Joe January who uncovers the seemingly impossible plot by grudgingly agreeing to help a pretty young woman locate her missing father—a Professor of Archaeology from Columbia College who must prevent the secret of Hitler’s location from falling into the wrong hands…

By the end of One Hot January, January is transported into the future where, in the sequel, January’s Thaw, he must survive by his century-old sagacity in our modern world.

“He may be Bogart-cool and clever, sharp-tongued and fedoraed—but underneath the veneer Joe January reveals himself both in his vulnerability and the most ageless adventure of all: a journey of the heart.” —Rachael Perry, author of How to Fly