I Was an Unwed Welfare Mother by Nicole Eva Fraser 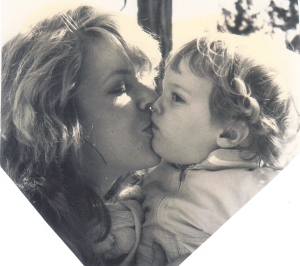 Some names have been changed for this essay, and some settings are composites.

In the summer of 1981, just after turning 22, I gave birth to a healthy baby boy and named him Caleb.

I was not married, and the man who had fathered my child was permanently out of the picture.

My divorced parents both shunned me for being an unwed mother in an era when it was still unspeakably shameful. Both my parents were toxic in any case; my friends were my family.

But my friends were in no position to help me. Emotionally compromised by post-traumatic stress, I was a college dropout and had barely been supporting myself as a minimum-wage secretary, living in two rooms off an alley behind a hardware store. I had zero prospects in the city where I was living. Then a faraway acquaintance invited Caleb and me to stay with her till I found a job and got on my feet. So I headed cross-country with my six-week-old son, two suitcases, the $150 I had to my name—and a purpose.

Like my parents, society shunned me—but I didn’t care because I knew in my heart that Caleb was my manna from heaven. Finally God had done something wonderful for me. For the very first time, my being alive in this world really mattered, and I needed to live and thrive so Caleb could, too. I vowed he would have a safe, healthy, happy life, and that he would know he was loved and wanted in a way I’d never been. For my sake and his, I would no longer be a victim but a victor.

Of course, any deep inner changes to my psyche would occur much slower than my conscious epiphany. Had I known what suffering and poverty lay ahead for us to conquer, I’d have felt daunted. But it wouldn’t have stopped me. Before ever laying eyes on him, I loved my beautiful child—first, for being himself and second, for being my reason to live. Becoming a mother was at once the most selfless and selfish thing I’ve ever done.

I didn’t plan to go on welfare—I planned to get a job. I applied for many secretarial jobs and went on some interviews, but never call a callback—probably because everywhere I went, I kept Caleb safely close to my breast in his baby carrier.

When I quickly got desperate for money, my temporary hostess said, “Why not go on welfare for a while? Look, you’ve been a taxpayer and you will be again. Welfare wouldn’t be forever.”

Her words made sense. So I took her suggestion and signed up for welfare, found a cheap three-room apartment in an old, cold building, and moved there with Caleb. He had a little crib; my acquaintance gave me an old couch, a lamp, and a mattress; that was the sum of our furniture. And so began our new life on government assistance.

I’m grateful for welfare because it provided the bare minimum of cash, food stamps, and medical care to sustain Caleb and me for a time. And that was all it provided: the bare minimum. But welfare supported us financially during a period of extreme trauma and deprivation when I had no one to turn to; and as bad as it was, we still fared better than if I’d worked at the kind of low-pay, no-benefits job for which I was then qualified.

On welfare, I received just enough money for rent and sparing utility use, plus a tight allotment of food stamps, and free medical care at the subpar welfare clinic, where wait times typically ran half a day.

At a minimum-wage job, I would have had virtually nothing left after paying for childcare, and could not have afforded medical care for Caleb or myself. In other words, my baby and I would have ended up sick and on the streets. I wasn’t a parasite milking the system; I was a mother supporting my baby in the best way I could find at the time.

Welfare allowed for one luxury: time with Caleb. We were always together. Sun, rain, or snow, with Caleb safely close to me in his baby carrier, we walked to the library, the laundromat, the park, the neighborhood grocery with the kindly clerks (God bless you all), the Goodwill store for our clothes and shoes. At home, I read to Caleb, sang to him, talked to him. At night I pulled my mattress next to his crib and slept sentry beside him.

Caleb didn’t know that we had very little furniture, few toys, and no social status whatsoever. But he knew how wanted and loved he was.

My saving graces through those times were a few of my longtime friends and my unyielding determination that I would give Caleb a safe, happy, healthy life. I had a certainty that everything would eventually work out for the best, although I had no idea how that would come about. I felt ashamed of being on welfare but trapped by the fact that working at a job I qualified for would be worse.

For inspiration, I copied this Victor Hugo quote from a library book and taped it to my kitchen wall:

“Welfare as we know it” has changed since those years, but one thing has not changed: to be on welfare marks you as the dregs of society.

The inconvenient truth is that U.S. citizens of the middle and, in particular, the upper classes have been quietly benefiting from un-stigmatized government assistance since America’s inception, in everything from tax loopholes to agribusiness subsidies to infrastructure developments, ad infinitum. Poor families reap far fewer benefits, yet the help they do receive carries the stink of an undeserved handout.

Some people, like me, use welfare during a time of personal crisis and then move on. But others may rely on different kinds of government assistance for a lifetime without ever being productive members of society. I have no way of knowing what has brought a given mother to welfare, or what keeps her there. But I do know that nobody lives on government assistance for the fun of it. People stay on it because they don’t know what else to do.

Today, providing my tax dollars for welfare to help feed and shelter my less-fortunate fellow citizens is the least I can do to help—and it’s not much. If only there were real help for the deeper problems, like the ingrained feelings of shame and alienation that can keep poor families plodding on a hopeless treadmill for generations.

Most people will never face the kind of personal and financial desperation that puts them on the outskirts of society—and for that, they should count themselves lucky. But life being what it is, most people will face some humbling, equalizing moment to remind them that there but for the grace of God, they might have gone (and perhaps still might).

Eventually I did get a permanent job, and Caleb and I were able to leave welfare behind—although leaving poverty behind took far longer.

As successful as the outer trappings of my life have grown, I can still feel the crimson humiliation of being an unwed welfare mother. Over thirty years later, I’ve never fully shaken that silent shame of the welfare life—but I’m glad the system was there to help me when I needed it.

Without friends, fortitude, and a little luck, government assistance alone would never be enough to save your life. But it should be there to ensure you don’t lose it altogether.

Caleb has no conscious recollection of our welfare days. He lives a safe, happy, and healthy life. He is forever my manna from heaven, heart of my heart, soul of my soul. And there are no words deep or high or wide enough to express the thanksgiving I feel for him.

Nicole Eva Fraser is the author of The Hardest Thing in This World, released by Second Wind Publishing in October 2013, and I Don’t Think It’s That Simple, forthcoming in March 2015.