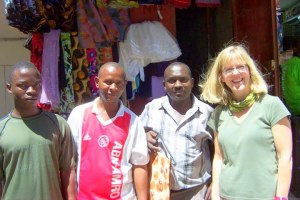 Bashir, wanume wawili (2 men) of kanga shop, and mzungu (me!)

I flew to Tanzania on Emirates Airlines—7,000 miles from New York to Abu Dhabi (about 14 hours), then 2,400 miles to Dar Es Salaam (5 hours), and landed at Mwalimu Julius Nyerere International Airport in Dar.

Here in Tanzania, Kiswahili is the national language and English is not widely known outside academic settings or businesses catering to or established by English-speakers (usually expats from Europe).

It was my first time being immersed in a city and country where I didn’t speak, read, or write the language. As a literacy activist, this was an experience I sought out and very much wanted to have. I wanted to be forced to rely on my wits and the help of others to navigate daily life because I lacked basic literacy skills.

After passing through Immigration, I got my bags and went outside, where Mr. Iddi (the taxi driver assigned to me by Palm Beach Hotel manager) was waiting for me with a sign bearing my name. Accompanying Mr. Iddi was a young man named Bashir, who worked in the hotel.

Mr. Iddi spoke as much English as I spoke Kiswahili: very little! That was precisely why he’d gotten permission for Bashir to accompany him. I was quite in awe of Bashir’s fluency in four languages—English, Arabic, Kiswahili, and Chewa (national language of Malawi)—and many regional dialects.

I felt immediate kinship with them—but had no other inkling of how I would come to depend on Mr. Iddi as a wise protector, and how I would feel a deep mother-son bond with Bashir, keeping us connected ever after.

We drove in convivial fashion to the Palm Beach Hotel, listening to bongo flava music on the taxi radio, as Bashir engaged me in a political discussion far more informed and intelligent than most such conversations I had at home in the U.S.!  He also had the natural gifts of an interpreter, easily translating our exchanges into Kiswahili for Mr. Iddi, and Iddi’s responses back to me, so the conversation was truly three-way inclusive. He also spoke with a great energy and enthusiasm for life that kindled my own.

Because the literacy conference would not begin until the following week, I had time for exploring the city, and had planned some destinations to visit. And so, the next day, Mr. Iddi and Bashir took me to Kariakoo Market, described as “the largest and most chaotic market in Tanzania.”

The local people shop at Kariakoo and I wanted to have that genuine experience. It wouldn’t have been possible for me without Mr. Iddi’s mastery of the city and Bashir’s multilingual gifts. Throughout our day at Kariakoo, I accompanied Mr. Iddi through the mazes of the market, feeling confident as he watched over me with his regal bearing.

And both of us relied on Bashir, who effortlessly spoke to everyone no matter what the language. At one unforgettable juncture, we were standing in a circle with merchants who spoke only Arabic, Mr. Iddi who spoke only Kiswahili and I who spoke only English—and thanks to the skill and heart of our interpreter Bashir, we all shared a wonderful conversation!

Please take the time to watch this 4-minute video; it’s a priceless window into Kariakoo Market. It includes subtitled interviews with longtime merchants and gives you a vivid, albeit quick, sense of the people and the place.

Here are a few photos from my day at Kariakoo: 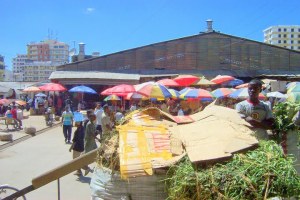 Fruits and vegetables for sale at Kariakoo 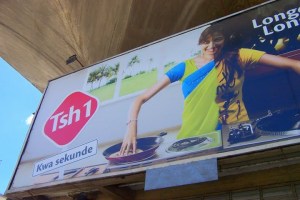 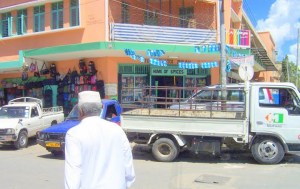 One of my hopes in visiting Kariakoo Market was finding kangas, which are colorful, sarong-like pieces of cloth with Swahili sayings along the bottom. We found a great shop where I purchased many kangas to bring home.

Shop where I bought kangas

The shop owner took kangas down from the line with a hook. We unfolded them and Bashir would translate the sayings for me—which is how I decided which ones to buy! A few highlights:

Here’s an example of how kangas are sewn to make outfits—this is Shani, a colleague I later met at the literacy conference:

Shani of Tanzania in kanga of African leaders 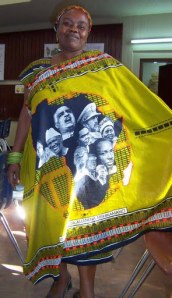 Back to my adventures with Bashir and Mr. Iddi. We also visited beaches—Slipway and Coco Beach—so I could dip my toes into the waters of the Indian Ocean for the first time! Dar Es Salaam is blessed with a refreshing wind, but the city is located at 6 degrees South latitude and I was shocked by the heat of the equatorial sun whenever I was out of the wind (for instance, on the tarmac in the Coco Beach parking lot). 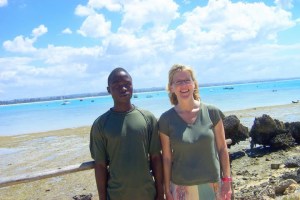 Bashir and me at Slipway 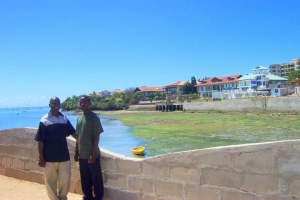 Mr. Iddi and Bashir at Slipway 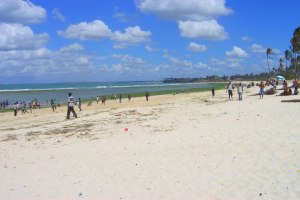 Coco Beach looking toward the city

On other days and evenings, the three of us (Mr. Iddi, Bashir, and I) enjoyed good times at Soma Book Cafe.

On one visit I met Edna, a librarian about my age, who worked at Soma. Our backgrounds were very different (she had been born and raised in the mountains of Tanzania) but as Edna and I talked, we were delighted and amazed to discover how much we had in common—as women, as mothers of young adult children, as literacy activists, as avid readers. Edna had even lived in Cleveland for a year during her college exchange program, when I also lived there.

What were the astronomical chances of our meeting? To paraphrase Casablanca, “Of all the bookstores, in all the towns, in all the world, I walked into hers.” 🙂 I had no clue that our simple bond of friendship would unite Edna and me like sisters across 10,000 miles in the years to come.

Here are a few pictures taken at Soma Book Cafe (I don’t have a photo of Edna and me).

Soma bookstore where Edna and I met

Bashir and Mr. Iddi called each other brothers, so one afternoon in the taxi together, I asked about their family. As it turns out, they are brothers of the heart rather than the blood; but to them it is the same.

Bashir was born in rural Malawi, one of the poorest countries in the entire world. His mother died when he was very young, and he helped his father and relatives farming the maize which was their primary, and often only, food. Because Bashir was so intelligent, he was seen as a hope for the extended family, and they pooled their meager resources to send him to school in the nearest city.

Bashir excelled in his studies and became multilingual as part of his education. However, after graduating from the equivalent of high school, he still could not find work in the city as he’d hoped, due to Malawi’s extreme economic problems which were exacerbated by government instability.

Bashir came up with a different plan to help his family, and went home to tell his father. He had decided to take a bus over a thousand miles to the huge city of Dar Es Salaam, in the more prosperous country of Tanzania, to find work. As soon as he could, he would start sending money home to his family. With great reluctance, his father let him go.

And so this brave young man set out on the grueling thousand-mile bus trip and arrived at the Dar Es Salaam bus terminal at night, with no friends, no money, and no idea where to start looking for a job or even a place to sleep.

Thanks to Almighty God, Mr. Iddi was waiting at the bus terminal that night, looking for taxi passengers.

And out of that crowd of people, Bashir and Mr. Iddi found each other—perhaps sensing a kindred spirit in each other—and began talking in Kiswahili. Bashir told Iddi his story.

Iddi said, “I have a wife and two young children. We all want to learn English. You can stay in our house in return for teaching us English.”

And thus two brothers were born.

Next: Attending the Pan African Reading For All Conference