A Day in Turkey with the Hittites by Mickey Hoffman

One of the most fascinating ancient cultures (and given a few lines in the Bible) is the Hittite culture. But many details about that civilization are unknown. This makes them all the more fascinating, I think.

Several Years back I had the good fortune to be taken around the Hittite ruins of Hatussas by a university student from Anakara. The ruins are a few hours from Ankara and situated looking over some rugged hills. The site is still being excavated and studied, but is thought to have been important in the metal trade around 2,000 BCE. They worshiped many gods, about 600 in total and built several cities, now all gone to ruin. What follows are photos I took at the Hatussas site. 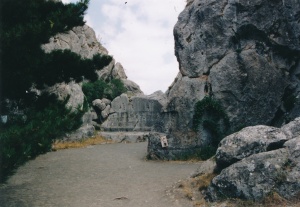 The first area is a religious site about a mile from the main ruins. This sanctuary with carved rock walls is called Yazilikaya. You can see a sign telling visitors not to jump around.

You enter through a very narrow and dark gap. 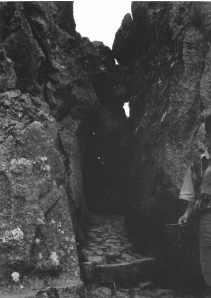 From the outside, it doesn’t look like there’s any point in going in there and I said as much to the patient student who knew better. 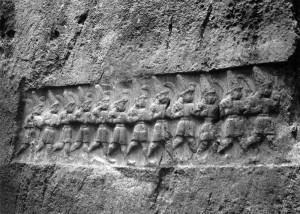 These guys are the warm up act for the big guns. Their attendants, really. 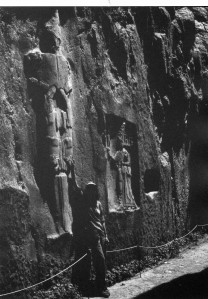 There I am, standing in front of them.  That rope, uh, I guess it’s to keep you from touching? But the student told me to go ahead and have a feel. I realize now I shouldn’t have because those gods should be preserved. To my right is my favorite, the Thunder God. He has an eagle. Below is a close up. Sadly, he hasn’t weathered the last three thousand-plus years too well. A few hours later, the bus that was taking me back to Ankara became trapped in a scary dust storm. See, you can’t touch them! 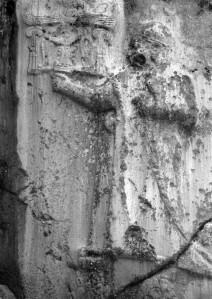 Below are examples of Hittite script. Because it’s almost impossible for an untrained eye to make anything out of the relief carvings, there are two examples of the writing below. 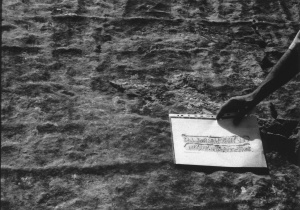 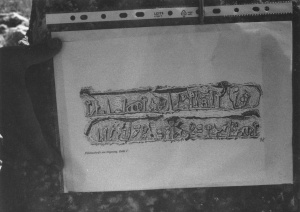 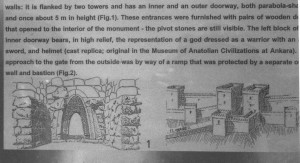 There once was a huge temple here with many associated buildings. Above is a drawing of the gate and environs. Below is what’s left of the gate. There were lions… 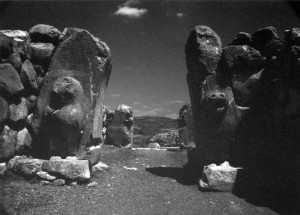 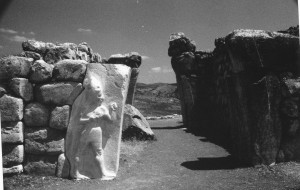 Below is the view looking over the surrounding area. These ruins are old storage rooms and contain huge pottery jars. You can see the sign asking people not to jump in them. *sigh* 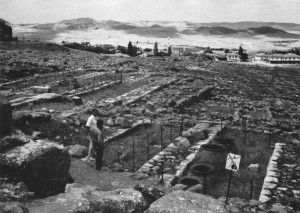 A close up shot of these amazing vessels: 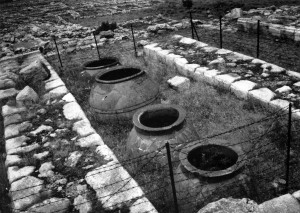 And now for a really mysterious place. A tunnel built to go under the city walls. Still intact after 4,000 years, it takes a bit of courage to walk through the 70 meter length. Just because it’s been standing that long doesn’t mean it won’t fall down “now”… 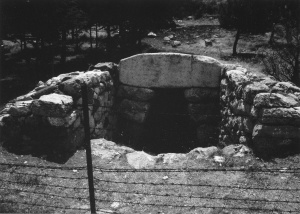 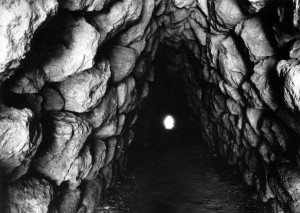 This stone stands in an area of fallen walls. An altar? I hope not to sacrifice maidens. Actually, I hope it’s wasn’t used to sacrifice anything. 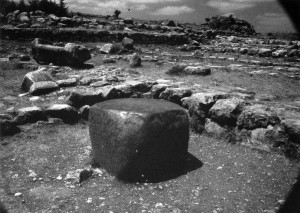 I hope you enjoyed the tour. My next blog will be about another fascinating place in Turkey, Istanbul. Here’s a preview and an etching I did later using part of the photo. 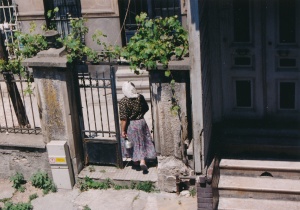 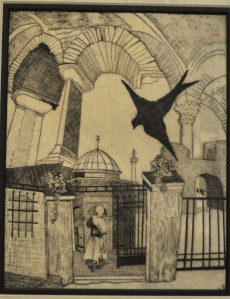