It would have been very convenient if Tracy, the main character of my new book, Merry Go Round, had turned out to be a fan of Blood, Sweat and  Tears. It only makes sense that her favorite song should be the 1969 hit, Spinning Wheel. The song is one of my favorites, and it’s full of merry go round imagery. My readers know how I love weaving in double meanings, even triple meanings that speak to or reinforce the theme of my books. 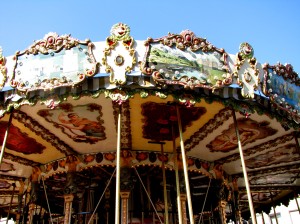 As an author, you would think that I could just make it happen. If I want the main character’s favorite song to be Spinning Wheel, then that’s the way I write it. End of story.

Unfortunately for me, and I’m assuming other authors who get deep into their characters POV, this is rarely the way it happens. It’s almost like magic, as you get into writing a book, the way characters acquire minds and thought processes of their own – and have ideas that often take you by compete surprise.

As I was working on Merry Go Round a couple of nights ago, I suddenly discovered that Tracy has a thing for Rita Coolidge’s music. I was re-writing a scene near the end of the book when the words to “Don’t Cry Out Loud” started floating through my brain. Then it was “Fool That I Am”, “We’re All Alone”, “Your Love Has Lifted Me Higher”, “The Way You Do the Things You Do”,  “Words”, “Fever” – a regular hit parade of Rita Coolidge songs, each one a perfect match with what was going on in Tracy’s life.

I know this may sound odd, but stay with me for a moment… Tracy went on to tell me that she had loved Rita Coolidge’s music from the time she was in junior high after being invited to a concert by a friend of hers. As usual, Tracy had only told her parents she would be staying over night at her friend’s house, not what they would be doing while she was there.

Her strict parents hadn’t let any of the Jones girls listen to rock and roll or popular country music, but after the concert, when Tracy told them that Rita grew up singing gospel in her church choir, her mother let her buy a cassette tape of her greatest hits (obviously, without looking at the song list). Tracy was always of the opinion that what her mother and father didn’t know, didn’t hurt them, and in this case, like so many others, kept the rest of Rita’s story to herself. I mean, isn’t that what headphones are for?

Then Tracy revealed the truly sad part of the story – at age sixteen, when Tracy started dating Trevor, her childhood sweetheart, she stopped listening to Rita’s music (because Trevor though she was too country) and started listening to Bette Midler, who was his his favorite.

Fast forward twenty years – when Tracy starts to reclaim her life, part of her journey is re-embracing Rita Coolidge. Thankfully, she’s learned that you don’t give up the music of your heart – for anyone.

Suffice it to say that when you read Merry Go Round (coming from Second Wind Publishing in late April), the song “Spinning Wheels” is never mentioned. But you will find snippets of several Rita Coolidge favorites. I’ll leave you with one: