“Pourquoi pas? Why not?” by Sherrie Hansen

I’ve been wandering around Europe for the last 3 weeks, and have just returned home. (Happily exhausted.) We were a day and a half late arriving home due to delays at the airport – not long at all considering that a little over a week ago we were listening to reports that this errant volcano might continue to spew ash for 2 years and fearing we might either have to take a steamer home or make a new lives for ourselves in Europe.

Yes, I have a wild imagination. That is what makes me a writer. My imagination has gotten me into trouble on more than a few occasions, but most of the time, it serves me well. Like it or not, I can’t seem to shut if off.

What if…? I wondered constantly, while we explored one country after another… 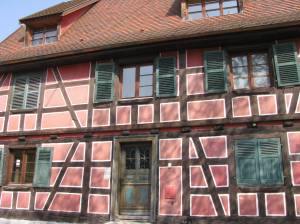 We were in Switzerland for only one night, so we didn’t get any money switched into Swiss Francs, assuming we would use our credit card as needed. After we checked into our chalet, we  drove into town, parked inside a parking garage and walked around downtown Lucerne until the sun set. We had dinner, then took photos of the lighted buildings reflected in the water of the lake until we were very sleepy. When we went to retrieve our car, we found that the machine would not accept our credit card.

Being stuck inside a parking garage (I hate parking garages, and we were carrying large amounts of cash, which scared me greatly), late at night, in a city we’re unfamiliar with, with no way to call for help (our cell phones didn’t work in Europe – even if they had, whom would we have called?) is not my idea of fun. We started to walk, and thankfully, found a woman who worked in a nearby bar who was willing to trade us some Euros for a few Francs.

We escaped the parking garage unscathed… But what if…

The next day, we drove through the Gotthard Tunnel to Italy and stayed the night at a 400 year old villa with shuttered Romeo and Juliet windows that looked out to the sea. After making multiple trips up 6 flights of stairs with heavy suitcases because we had been told to not to leave any luggage in our car in Italy, we were so tired that we pretended we were Sleeping Beauty instead of Romeo and Juliet. (In the morning, we found out there was an elevator…)

After we had walked along the sea for several miles, snapped some magnificent photos, and eaten a hearty breakfast, we had a wild ride along the Mediterranean in our little rental car (which was big by Italian standards). My husband was very good at maneuvering his way through and around the narrow streets, traffic congestion and curves. Still, scooters were everywhere, along with millions of people, kids, cars, and bicycles. At some point, we were hungry and thirsty and wanted something to eat and drink. There were no places to pull over or to park for miles on end.

What if… I wondered… What if my husband let me out of the car long enough to grab what I needed while he circled around? Would he ever find me again? Would I ever see him again? The thought was slightly terrifying, and we decided not to risk it.

And then, I started to wonder… What if I didn’t want to be found? What if I wanted a new life? What if, instead of returning to the designated pick-up point, I slipped out the back door of the shop and never came back? What if I simply disappeared?

I had a few hundred dollars, my passport and a credit card in my purse. Where would I go? What would I do? Whom would I trust to help me? Who might I meet? What would happen to me? What would my life look like a few weeks, months, or years down the road?

And then, I was given a new question to ponder, if I were ever to get tired of asking “What if?”

After relaxing a bit in Provence,  we traveled to Aix-en-Provence, and met a fascinating woman who is a friend of a friend. She grew up just a few miles north of me, in Southern Minnesota.  At some point, after she was divorced and her children were grown, she sold her house and everything she owned and moved to southern France.

“Pourquoi pas?” she replied, without hesitating.

2 responses to ““Pourquoi pas? Why not?” by Sherrie Hansen”